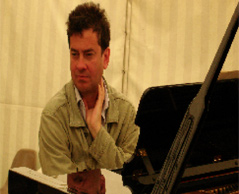 Vladimir Miller studied music at Trent Park University from 1981-4, during which time he experimented with contemporary theatre and performance arts projects and regularly performed the works of such composers as Kurt Weil.

In 1987 he formed a modern jazz quartet playing his own compositions on the London jazz circuit whilst maintaining solo piano residencies over a period of three years. In 1990 he formed a composition partnership with singer / songwriter Heather Joyce and co-wrote music to an award-winning theatre production of Carousel’s ‘Smokescreen’, premiered at the Brighton Festival. Their music has also been performed throughout England, including festivals at Bath and London’s Soho.

In 1992 Vladimir travelled to Eastern Europe to explore new musical possibilities. He instantly formed new musical associations with musicians and performance artists that have continued to endure. His collaborations with installation art group ‘Blah’ and musicians such as Vladimir Rizitsky (reeds), Vladimir Tarasov (drums), Vladislav Makarov (cello) and Alexander Alexandov (basson) have led him to festivals in Siberia (Novosibirsk and Irkutsk), Arkhangelsk, Nijzni Novogorod and Ekaterinbourg in Russia, Odessa and Kiev in the Ukraine, Lithuania and Latvia.

Vladimir has been awarded two British Council sponsored grants. The first was with multi-instrumentalist and songwriter Paul Moss, touring the town perimeters of Moscow. The second was an education workshop project with Scottish drummer Ken Hyder in the Russian republic of Tuva, on the borders of Mongolia and Estern Siberia.

His frequent visits to Moscow and consequent close interaction with music producer Nikolai Dmitriev helped cement the forming of the Moscow Composers Orchestra (MCO), which he now directs. Since the debut CD ‘Kings and Cabbages’ released by Leo Records in March 1993 the MCO has experienced successful concert tours of Germany, Italy, Switzerland and others, including individual performances at ‘Tampere Jazz Happening’ in Finland, Koln Musik Triennale in Germany, Bolzano Jazz Festival in Italy, Vienna Russian Festival in Austria, Mimi Jazz Festival in France and as part of ‘Unsung Music’ at London’s South Bank. This last concert was broadcast on BBC Radio 3’s ‘Impressions’ programme. MCO have released seven CDs to critical acclaim. Scott Yanow, in Jazziz, wrote “shocking at first..but, as one becomes accustomed to the long tones and motional intensity, the music becomes magically coherent and logical.” In BBC Music Magazine Ian Carr described the MCO as “a highly successful venture in the improvised music area.”

“Miller …avoids flamboyance, buliding solos through sure and steady accumulation, gravity in the harmonies, tenderness in the touch.”
(Julian Cowley. The Wire magazine 2003)

“The solos he plays on originals such as ‘Between Two Storms’ are expressive and fleeced with a composer’s instinct for form.”
(John L Walters. The Guardian 2003)