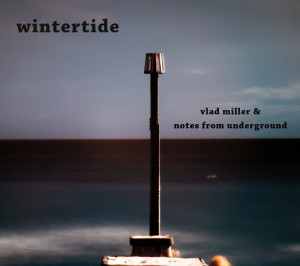 The effect that ‘Notes From Underground’ want to have on their listeners is immediate, direct, and accessible in the best sense. They want their music to grab your ears and your body and not let go until you’ve been variously pulverised, pummelled, or pleasured into submission.

They perform original compositions by the pianist Vladimir Miller whose writing is largely stimulated by jazz, Eastern European and Russian music traditions. Strong melodies weave into jazz improvisation influenced by composers such as Igor Stavinsky, Steve Reich and Paul Bley. Their live performances are engaging, exciting and often unexpected.

Their first album ‘Diaghilev’s Dance’ was inspired by the life of the famous Russian impresario Diaghelev, and his dance troupe ‘The Ballet Russes’. The Vortex magazine wrote: “With the odd ballad providing balance, this is an intelligently programmed, consistently absorbing set from a versatile, musicianly and subtly interactive band.”

The compositions on their last album ‘Gagarin Sang A Hymn In Space’ centre on subject matters ranging from lives of insects to the Cold War.

Leslee Booth became a professional musician in 1982 after studying at The Musicians Institute in Los Angeles. The Madras-born bassist’s subtle Indian nuances have lent support to some of the best American jazz names such as the legendary singer Billy Eckstine, with whom he toured extentively in the British Isles. He has also collaborated with Gloria Gaynor, Freda Payne, George Williams and Beatrice Reading. He currently plays a six-string contra-bass. He is also a important member of the guitar based Branco Stoysin Trio, who perform regularly on the British jazz circuit scene.

David Rohoman was born in Guyana, South America. Disabled at birth, he took up drums to exercise his legs. On moving to London he began playing in various rock bands where he was spotted by Ian Dury, who persuaded him to join The Kilburns. It was the jazz played by them, in particular by sax player David Payne, which led David to explore jazz improvisation. Ever since he has remained on the jazz circuit, performing with some of Britain’s finest musicians including Jim Mullen, Dave Newton, Django Bates and Mornington Locket.

Adrian Northover has toured extensively in Europe and North America, with B Shops for the Poor, The Remote Viewers and Sonic Phonics (with Billy Bang). Recent CD releases include Crimeways, by The Remote Viewers with John Edwards and Mark Sanders, and a number of duo CDs with Adam Bohman, as The Custodians. As well as solo saxophone performances, Adrian can currently be heard playing on the London club scene with a wide range of musicians,  John Edwards and Steve Noble in ‘Hard Evidence’ a trio playing the music of Thelonious Monk, The London Improvisers Orchestra, and Trip-Tik (with Catherine Pluygers and Adam Bohman). Adrian also works with Harvir Sahota (tabla) and Tasos Stamou in Jazz-Thali, playing Indo-Greek Jazz fusion.