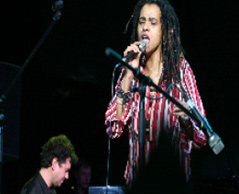 Vladimir Miller and Helen McDonald met during jam session evenings in London’s West End and gradually cemented what is now Ancestral Collective. They have written many songs and pieces together and have collaborated on a multi-media jazz suite called ‘Pushkin in Africa’ which describes the life of the celebrated Russian poet Alexander Pushkin, and focuses on his African ancestral roots.

Their music draws on inspirations from Western Africa and Eastern Europe. These two widely different cultures have come together in a stangely unifying manner; there is a natural fusion that sees, for example, Vitus Pilibavicius playing the ragus, a Lithuanian folk instrument, and Helen singing in the Nigerian language Yoruba. Ancestral Collective symbolises the meeting of these cultures, propelling the music into an exciting array of vocal textures and jazz rhythms with passages of creative instrumental interaction.

To date they have toured in the Baltics, including an appearence at Kaunas and Birstenas jazz festivals, and in Germany, which entailed a residency at the Bayerischer Hop nightclub in Munich. They have also toured in England and performed in many cities including Derby, Birmingham, Cardiff, Brighton, Nottingham, Eastbourne and London.

Two CDs, Picking Up and Descendants, have been released on the British label ASC records.